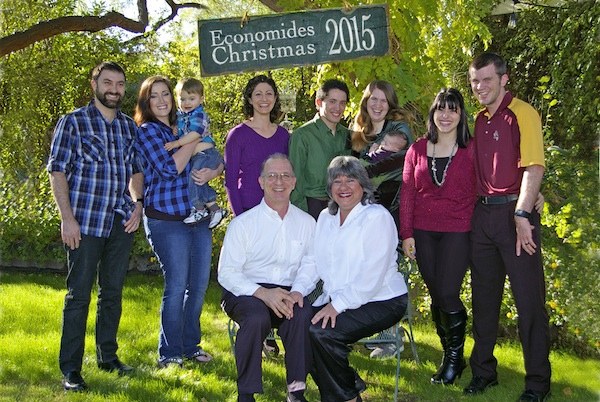 Is Economides Really Your Last Name?

Born 1994. Works at Grand Canyon University. Married Collin in 2014. Has 2 Pit bull mix doggies which are like her children for now. Attending GCU for her Master’s degree.

What is your view on Debt?

We’ve seen debt destroy so many lives that we encourage people to do as much with the money they do have as possible. Use Creativity Instead of Credit!

How quickly did you pay off your home?

We paid off our first house in 9 years on an average income of $35,000. Our current home has 5 bedrooms and is set on 3/4 of an acre with a citrus orchard— it’s paid off too.

Where do you Live?

We live in Scottsdale, Arizona.

How much do you spend on Groceries?

When we had 5 children living at home we spent $350 per month to feed the entire family—an average of $50 per person. The average family of four spends about $800 per month ($200 per person). We now spend less.

Have you ever had a car payment?

We’ve never had a car payment. We have always purchase pre-owned cars and paid cash for them. In a city our size, there is always someone looking to sell the very car we want. When we find that person, we always find a deal.

What’s your view on Kids and Money and Allowances?

We don’t believe allowances teach anything but an entitlement attitude. Rather than giving money to our kids, we invested money in them by teaching them to work for the money they earned from us. We’ve developed the MoneySmart Kids system to teach our five kids to earn, save and spend their money wisely. As a result they have paid cash for their cars and paid for their own college educations.

Do you have any pets?

We currently have two rescued German Shepherd dogs. In the past we’ve had lots of hamsters, two noisy parakeets and a breeding family of 5 box turtles.