Today Show  – groceries. We appeared on the Today Show the three days in a row: Sept 29, 2010, Sept 30 and October 1. This was in conjunction with the launch of our book Cut Your Grocery Bill in Half. You can watch the videos below and find some great deals at the bottom of the page.

We shot the background video the week of August 16 with producer / cameraman / video editor Josh Weiner. He was a real trooper and kept up with us as we showed him how we did bulk cooking, planned our grocery shopping, took inventory of our freezer, bought bulk items from a mini warehouse and purchased over 25 paper bags full of groceries from a grocery store (average price of $7.50 per bag).

Below are the videos of the three interviews we did on the Today Show. Hopefully, you can pick up a few ideas that will save you a boodle! 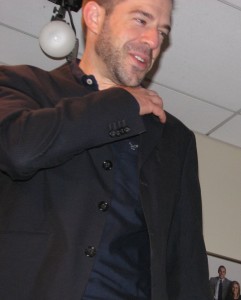 After the ribbing we got from Matt Lauer on Day 2, we got back at Josh by actually hiding all of the food in the Green Room on Friday morning. He came down to brief us on the upcoming segment. Boy was he hungry and all he found was a small cracker in the middle of the table where the trays of food were suppose to be. He said, “Come on, you guys are kidding, right?” Zing!

Steve had the camera positioned in his lap to catch Josh’s expression when he discovered that there was no food left for him.


Natalie Morales helps us field questions from viewers in this spot
You can read the written story here on the NBC website.